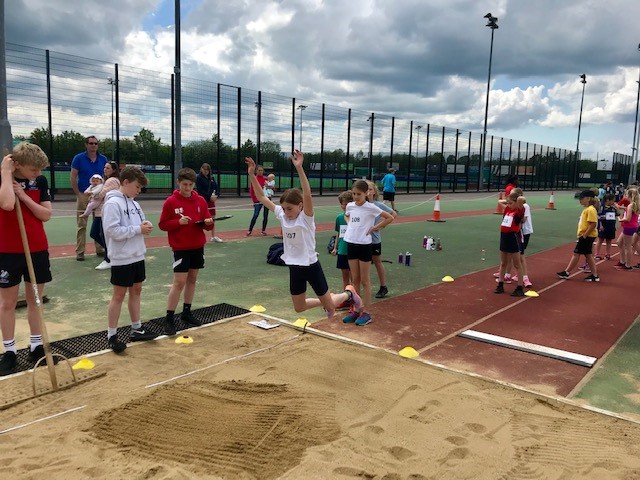 The fantastic facilities at Cambridge University Sports Ground on Wilberforce Road once again played host to the annual South Cambs SSP Quadkids Athletics Competitions, with a record number of 37 teams and 370 youngsters from 28 different schools competing in the events.

Teams were not only competing for the title of ‘South Cambs Champions 2019’ but also the honour of representing the partnership at the Cambridgeshire & Peterborough School Games Finals later in the month at St Ives Outdoor centre. 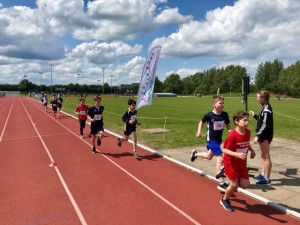 Quadkids is a team-based competition with 5 boys and 5 girls each competing in a 75m sprint, a 600m run, a long jump and vortex howler throw. Individual performances are scored using a points table and the winners are the team with the highest cumulative points score so it is important that every athlete puts in their very best performance in each event.

The ‘Big Schools’ team competition had a clear winner this year, with a 50 point lead Histon and Impington Junior school took the trophy whilst last year’s winners Bassingbourn finished as runners up. Both teams now qualify for the County School Games Summer Festival on Thursday 27th June in St Ives. Histon & Impington Juniors showed their strength in depth with their B team finishing in an amazing 3rd place out of 19 teams.

In the ‘Small Schools’ competition the team from Harston and Newton Primary finished as clear winners with Meldreth finishing as runners up for the second year running. In third place was Great Abington. This sees Harston and Newton and Meldreth off to the County School Games Finals.

There were also some great individual performances on the day with a mere 4 points separating the top 3 placed boys in the ‘big school’s’ event. Zach from Linton Heights took first place though with 241 points. Last years winner Finlay from Bassingbourn came an extremely close second with 240 points. Evie from Histon and Impington was first placed girl with 204 points.

There was a record number of nominations for our special ‘Spirit of the Games’ award which is awarded to an individual that has demonstrated one or more of the sporting spirit values of respect, determination, teamwork, honesty, passion and self-belief. With so many great nominations we had to choose those we felt most worthy to collect a certificate and sports bag, not an easy task!

Winners included Jacob from Bassingbourn and William from The Meadow who showed great sportsmanship and respect by helping another runner around the track after he fell in the 600m.

Tom from Burrough Green was another winner of the Spirit of the Games award for always striving to his best throughout the day and for being kind, friendly and patient to other athletes.

The event was supported by members of the Partnerships successful Leadership Academy programme with a team of 32 year 9 leaders from Swavesey Village College helping at both events and demonstrating responsibility, care and initiative beyond their years in leading the events, officiating, scoring, inputting results and acting as team managers.

Further leaders from Cambourne and Comberton Village Colleges joined them to help with the big school’s competition after school and again did a great job.

Primary school staff were asked to nominate the best leaders on the day for our new ‘Leaders Award’. Harry, Archie, Ben, Megan & Kyle all received nominations but with four nominations the winner of this award was Jen Fairweather. 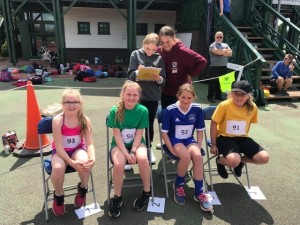 Claire McDonnell, Partnership Manager said “It was a great event and fantastic for the children to get to compete at the athletics track and use such lovely facilities, I hope it will have inspired some of them to get more involved in athletics. There were some excellent performances on the day so congratulations to all our winners and well done to everyone who took part. As always we have to thank the amazing sports leaders who organised and scored the events for us, they did a great job and the staff and parents were full of praise for them. ”

Further photos from the event can be viewed on our Facebook page.