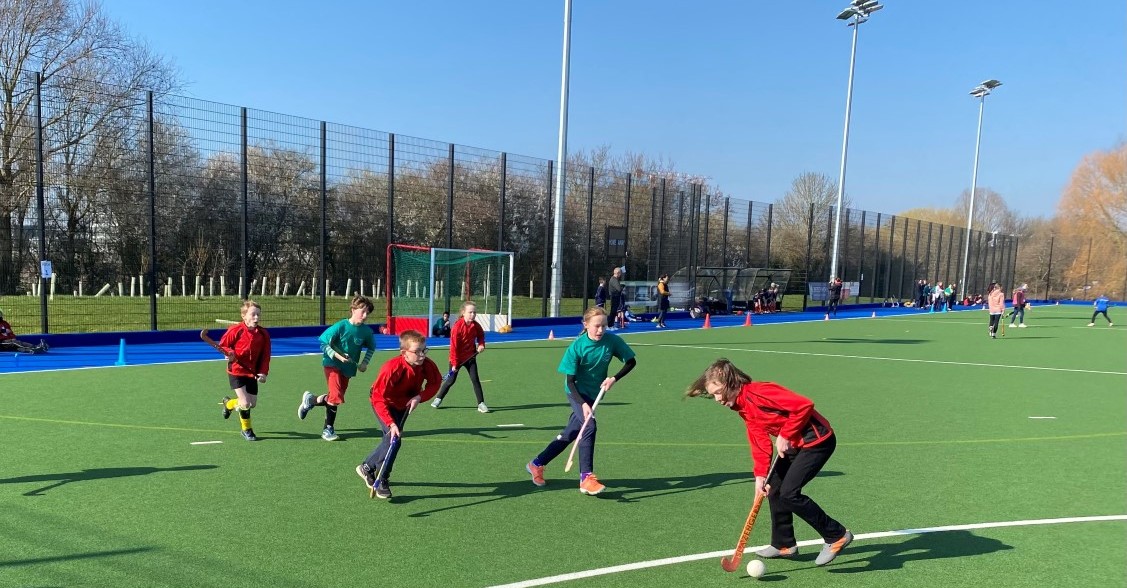 It was an action-packed day of hockey as the South Cambs School Sports Partnership welcomed 40 teams to their annual Year 5/6 Quicksticks Hockey competition. With so many entries the event which was held at the University Sports Ground on Wilberforce Road was split into a morning and afternoon competition.

There were plenty of competitive matches and close scoring games in the ‘Cup’ competition as the 4-a-side teams made up of 2 boys and 2 girls gave their best effort to do well for their school. In the morning it was the teams from Meldreth and Fen Drayton primary schools that won their groups and qualified for the final, with the score 1-1 at the end of normal time the final went to golden goal.  It was Fen Drayton who scored the all-important goal, clinching victory and the winners’ medals which were thoroughly deserved after 5 wins out of 5 in the competition.

The final of the second ‘Cup’ competition played in the afternoon was contested by the teams from Histon Brook and University of Cambridge Primary with both teams playing some great hockey in the round robin stages and winning all their matches on the way to the final. The team from Histon Brook were the better team in the final though winning the game 4-1.

In the ‘plate’ competitions meanwhile, it was The Meadow B and Bassingbourn B that won their groups in the morning event with Bassingbourn coming out on top in a closely fought final match. In the afternoon competition it was Coton B and Histon Brook B who won their groups to make it to the final. With both teams unbeaten it was always going to be a closely fought match and it didn’t disappoint with Histon Brook claiming victory with a narrow 2-1 win.

There was also recognition on the day for those teams who had taken part in the ‘Spirit of the Games’ and demonstrated good teamwork and honesty in their performances. There were lots of nominations for these awards which was great to see but the winners were Pendragon, Cottenham, Bar Hill and Meldreth who were all nominated for being supportive of their teammates and the umpires and showing great teamwork and fair play towards other teams. 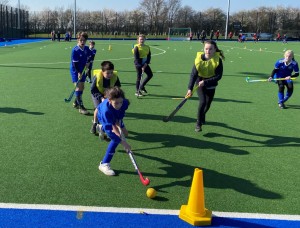 “It is great to be back running events like this and seeing the fun and enjoyment it brings to the children. They have missed out on competitions like this over the last two years, they were so excited to be there and to be representing their schools, playing with their friends and developing those social connections.  It was such a positive day with lots of competitive matches all played in really good spirits.

The sports leaders from Comberton Village College did an exceptional job as well, umpiring games across the 8 pitches and supporting and encouraging the primary school children. We really appreciate their support; we couldn’t run events like this without them. 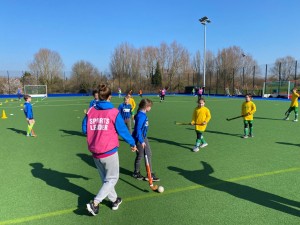 Junior hockey continues to grow across Cambridgeshire and it was nice to be at Wilberforce Rd where Cambridge City and Cambridge Nomads train and play their matches and we were really pleased that Arthur Meadows one of the coaches from Cambridge Nomads Juniors could join us for the day to speak to the children and encourage them to try out hockey at a local club. I hope some of the children that took part in todays event go back home and ask their parents to take them along to a training session to give hockey a go. More info on the junior clubs in the area can be found on our website.”