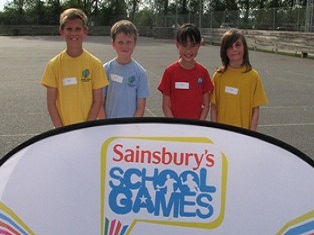 Posted by Matt
News
Comments are off for this post

The top four primary school tennis teams from South Cambs came together for the first SSP finals night on Monday 9th June. The teams of two boys and two girls from Haslingfield, Meridian, Elsworth & Harston & Newton made it to the finals as the top teams from the qualification rounds played last month. All of the teams had done extremely well to make it to the finals in a competition which had a record entry of over 40 teams this year.

The finals were played in a round robin format which each team playing the other three in timed singles matches. As expected the matches were extremely competitive with a great standard of tennis on display and some really close scores.

The final round of matches were very tense with 3 teams still in with a chance of claiming the title of SSP Champions. Elsworth stepped up their play in their last match though with a 3-1 victory over Haslingfield which meant both teams finished on equal wins (5) overall. On count back of percentage of points won to points played though it was Haslingfield that finished 3rd with Elsworth 4th.

The Meridian team played some fantastic tennis in their last match against Harston & Newton and looked like they were going to win it until the last few points. A draw was enough for both teams though with Meridian finishing second with 6 wins and Harston & Newton finishing first with 8 wins and retaining their title as SSP champions. The teams from Harston & Newton & Meridian will now go forward to represent South Cambs SSP at the Cambridgeshire & Peterborough County School Games Summer Festival on 27th June in St Ives, we wish them the best of luck.

You can check out some more photos on our Facebook page and don’t forget to ‘like’ us!

About the author: Matt