The morning was full of activity and excitement with children competing in pairs as they rotated around four different sports: Polybat, Boccia, Table Cricket and New Age Kurling. For many of the children this was their first experience of representing their school and taking part in competitive sport so the event was very much about the children having an enjoyable experience and trying out some new sports, with an element of competition added in. Children played matches and scored points on each activity and these were added together to give each pair a total and determine the winners. 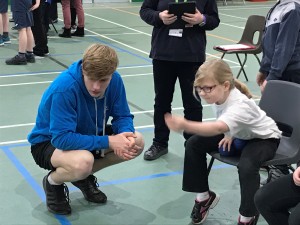 Over 60 children with additional needs, which could be physical, learning, sensory, or a combination of these took part in the event which was hosted at Impington Village College. A group of sports leaders from the college helped to run the activities and score the matches which included children from Milton, Bassingbourn, Cottenham, Waterbeach and the University of Cambridge Primary School and Histon & Impington and Linton Heights Junior Schools.

After all of the activities had taken place the points were added up and the finishing positions announced. The final positions were extremely close with the top three South Cambs pairs all finishing on 30 points! This meant the joint winners on the day were Joshua & Tristan (University of Cambridge), Olivia & Jacob (Waterbeach) and Jack & Bella (University of Cambridge) and finishing 2 points behind them in 4th place were Harry & Jayden (Milton). 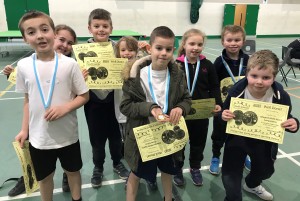 These four pairs will now join together to represent South Cambs SSP and compete as a team of 8 at the Cambridgeshire & Peterborough School Games Spring Festival on 22nd March, we wish them the best of luck!

Partnership Manager, Claire McDonnell said, “It was great to see so many children taking part in this event again this year and it was nice to see some new schools getting involved as well. For some of the children it was their first time trying out some of these sports and you could tell they were a little apprehensive about it when they arrived but they soon got into it, their nerves disappeared and the smiles and enjoyment on their faces said it all! One group from Linton Heights School later said ‘it was their best morning ever!’ The children particularly enjoyed the New Age Kurling with many of the children asking their teachers if they could do more back in school!

I must mention the sports leaders from Impington who were exceptional, they did a fantastic job in ensuring the event ran smoothly and we must also thank Living Sport and Cambs Cricket for their support in enabling the event to run.” 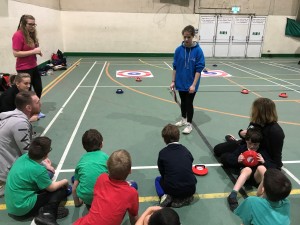