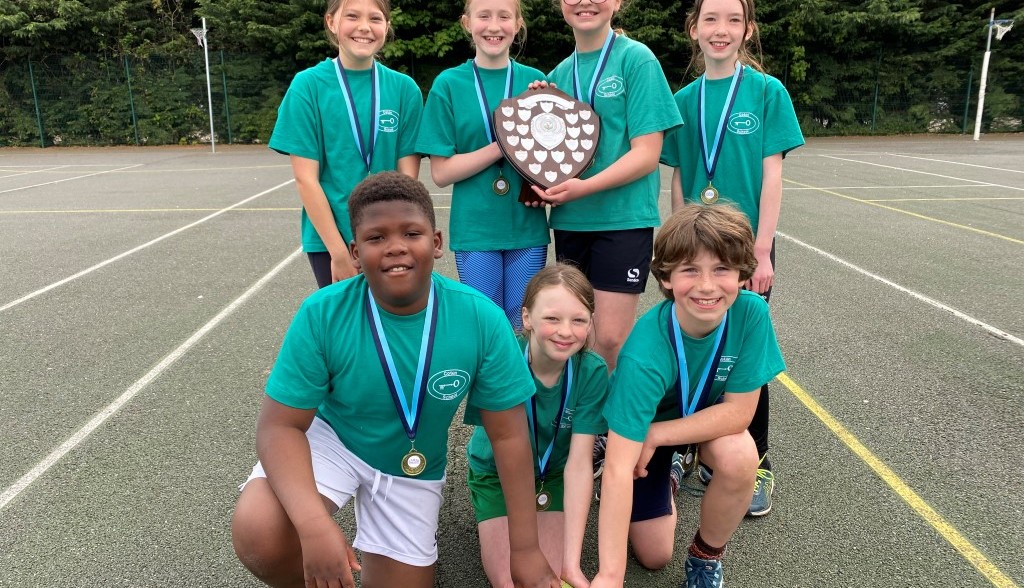 The last week has seen the culmination of the annual South Cambs A team Bee Netball Leagues with over 50 teams taking part in two divisional rounds at their local secondary school before qualifying for one of three finals nights.

Fifteen primary schools competed in the A Team Shield which was held at Impington Village College after finishing in the top half of their local leagues.  At stake was the title of South Cambs Bee Netball Champions 2022 and a chance to qualify to represent the South Cambs area and take on the best school teams from across Cambridgeshire at the county finals on 24th May.

The schools were split into three pools, with each team playing all of their rivals within that group to determine whether they qualified into Division 1, 2 or 3 for the next round of matches. The teams from Meridian, Burrough Green and Coton won all of their group matches to qualifying for Division 1 where they were joined by Swavesey and Linton as the next two highest placed teams, to play against each other for their final positions.

The final round of matches were closely contested with a high standard of netball on display and the final results had to be determined by goal difference as the top 4 schools all finished within one point of each other. By a very narrow margin of one goal, Coton Primary school were crowned as this years shield winners. In second place and with the same number of points were Linton Heights, with Swavesey taking third position. Also on the same number of points but with a slightly lower goal difference were Meridian primary school in fourth and Burrough Green finishing in fifth place.

Coton, Linton Heights, Swavesey and Meridian will now go forward to the county finals and I’m sure they will continue to put on an excellent performance as they represent South Cambridgeshire.

A special mention to Bassingbourn Primary School and University of Cambridge Primary for receiving the most nominations for our spirit of the games award, with both teams showing great examples of passion and teamwork throughout the competition.

The A Team Plate final is for those teams who finish in the lower half of their local league and was established to make sure all schools get the opportunity to compete in a final’s night. Played earlier in the week at Comberton Village College this featured 14 teams with Barnabas Oley, Harston & Newton, Meadow and Hatton Park being the four teams to make it through to the top division after the first round of matches. After a display of excellent netball across all of the courts the overall winners were Harston & Newton, with Barnabas Oley finishing as runners up. Willingham Primary school won the ‘spirit of the games’ award for their excellent teamwork which was recognised by a number of the other schools.

Tournament organiser, Julia Scarboro said, “Our annual Bee Netball League is one of our most popular competitions, we had 31 different schools taking part this year and just over 50 teams. After a two-year break from competition, it has been lovely to see so many pupils taking part.

The children really enjoy the opportunity to represent their school in inter-school competition and it is nice for them to get the chance to play in the league rounds before experiencing one of the finals nights which are played in a friendly yet competitive spirit. There is always a nice atmosphere and a real sense of occasion as parents gather to cheer on their children.

We still have the B team final night to come on Thursday 19th May and we expect that to be just as exciting as the first two competitions.