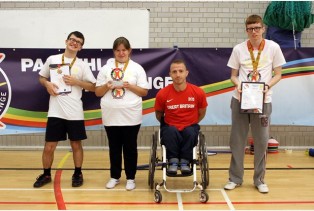 A combined team of disabled children from Granta School and Comberton Village College represented Cambridgeshire at the East Region Final of the Panathlon Challenge, a mini Paralympics-style event for children.

The South Cambs pupils, who won their county final to qualify for the event, battled it out with rivals from Suffolk and Essex in the first regional final of the multi-sport competition.

A consistent performance throughout the competition, which was held at The College, Braintree, saw them win silver medals in boccia and the athletics field events. And they went into the final event of the day within reach of eventual winners Suffolk but after a thrilling set of relay races, the Cambridgeshire team were edged into fourth place.

Despite missing out on victory, the team came away from the event in high spirits.

Comberton Village College student Matthew O’Leary, who has only 10 per cent vision in one eye, helped his team to victory in the precision beanbag throw where players score points by throwing beanbags on to a mate with a grid containing brightly coloured numbers.

He said: “Panathlon has been a big help for me.

“It inspires me and it inspires so many to take part in sport. Its a really good thing.”

“The kids always have great fun coming to something like this. There’s not an awful lot of competition out there for children with a variety of special needs, but Panathlon provides that. They have a great time. They feel equal among everybody that’s here and they enjoy themselves.”

Granta School youngster Toby Peak won bronze in the polybat, a Panathlon derivative of table tennus played with adaptvie equipment to open up participation to all.

“It’s my first time at Panathlon. It makes me feel proud. We played very well and won two games but lost two games. Polybat takes a lot of skill, effort and coordination.”

Granta School teacher Allison Darken, added: “Panathlon has made a huge difference. When I first joined the school, they didn’t play boccia, but now we play and have made the national finals, where we came eighth out of 250 teams. We also play table cricket and polybat. All of these sports have come to school in the last four or five years, so we’ve come a long way in that time. We’ve got all the equipment, which helps more kids to play sport. It’s great. The kids feel great pride at being here and it raises their self-esteem.”

Great Britain wheelchair athlete Richard Chiassaro was present at the Panathlon as special guest and was impressed by what he saw.

“I’ve been to a couple of Panathlon events before but this is the first regional final and the standard has been really high,” he said.

“There was nothing like this available to me when I was a kid. I wish I’d had the opportunity that these children have got. What Panathlon are doing is brilliant and I’m really happy to be here and try to inspire these kids to keep doing it.”