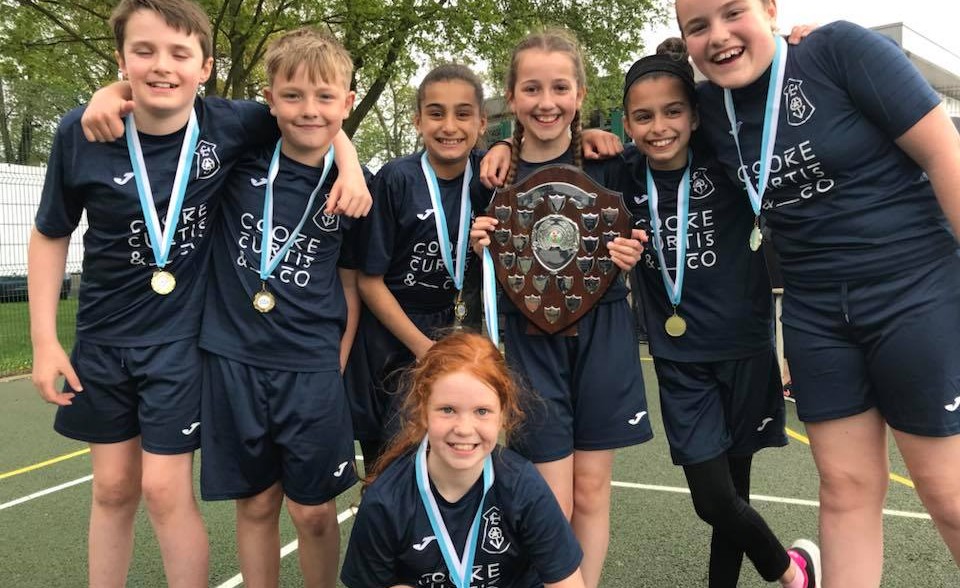 The last few weeks have seen the culmination of the annual South Cambs High 5’s Netball Leagues with a record breaking 60 teams taking part in two divisional rounds at their local secondary school before qualifying for one of three finals nights.

Sixteen primary schools competed in the last of the three finals, the A Team Shield which was held at Impington Village College on Wednesday 25th April. At stake was the title of South Cambs Champions 2018 and a chance to qualify for the county finals, where the top four schools on the night would go forward to represent the South Cambs area and take on the best school teams from across Cambridgeshire.

The schools were split into four pools, with each team playing all of their rivals within that group to determine whether they qualified into Division 1, 2, 3 or 4 for the next round of matches. The teams from Coton, Jeavons Wood and Linton Heights won all of their group matches on their way to qualifying for Division 1. They were joined by Bar Hill who qualified for the top division ahead of Harston & Newton by the narrowest of margins and courtesy of conceding just 1 less goal in their group matches.

The final matches were closely contested with an extremely high standard of netball on display but it was Linton Heights Junior School who came out on top with 2 wins and a draw earning them the title of South Cambs Champions 2018. Coton finished as runners up with Bar Hill in 3rd and Jeavons Wood 4th. All four of these teams now go forward to represent South Cambs SSP at the County Finals on Thursday 5th July.

The A Team Plate final is for those teams who finish in the lower half of their local league and was established to make sure all schools get the opportunity to compete in a finals night. Played earlier in the week at Comberton Village College this featured 15 teams with Bar Hill, Pendragon, Fenstanton and Milton the four teams making it through to the top division. Fenstanton played some lovely netball to finish as winners on the night and were proud to take home the shiny ‘winners plate’ for the first time.

The B team final was played before the Easter holidays on an afternoon of sun and showers at Impington Village College. Winners of this competition were Linton Heights who played some outstanding netball and remained unbeaten, scoring a hat full of goals and only conceding 1! Runners up were Cottenham Primary.

Partnership Manager, Claire McDonnell said, “Our annual High 5 Netball League is our most popular competition of the year with a record number of 60 teams from 32 schools taking part in the league rounds this year, it really does just get bigger and better. The standard of netball in the A team shield finals this year was excellent and the Linton B team played some exceptional netball in winning their tournament, the best I have ever seen from a B team I think.

The children really enjoy the opportunity to represent their school in inter-school competition and it is nice for them to get the chance to play in the league rounds before experiencing one of the finals nights which are played in a friendly yet competitive spirit. There is a nice atmosphere and a real sense of occasion as parents gather to cheer on their children.