Posted by Laura Mott
News
Comments are off for this post

Here at South Cambs SSP, we are excited to have been recruited as part of a new project by the Youth Sport Trust and the FA, to become 1 of 100 FA Girls Football Partnerships across the country.

The aim of this project is to work towards the FA’s target of doubling participation by 2020 and providing equal access to football opportunities for girls.

Through being a Lead Partnership, we get lots of amazing opportunities for both Primary and Secondary school pupils and staff.

Disney have partnered up with the FA and Youth Sport Trust to create a new initiative for primary schools to get involved in – ‘Shooting Stars’. This initiative uses hit Disney Films such as ‘Incredibles 2 and Aladdin’ to capture the imagination of the girls whilst developing their movement and football skills as well as speaking and listening skills.

‘Game of Our Own’ is a project aimed at secondary schools to increase leadership skills in girls. It also aims to provide schools and teachers with a better understanding of barriers to participation and how to engage girls. The programme trains girls as football activators who are supported to lead a project within their schools that increases girl’s participation. There are both marketeers (who design and create advertising for the project) and deliverers (who deliver the content). There is then a follow up opportunity for these girls to go to a National Girls Leadership Camp.

Izzy King a former Cambourne Village College, now Comberton Sixth Form Student was a Girls Activator last year and attended the National camp which was held at Loughborough University. Whilst there she impressed everyone so much that she won an award and got to go to Endicott College in the United States during October Half Term. Well Done Izzy!

Through being a Lead Partnership, we have had cool opportunities as well! Such as getting to send a group of school children and staff to the record-breaking England v Germany match at Wembley. To find out more or to get involved with this exciting programme please contact Laura Mott who is leading on this work lmott@combertonvc.org 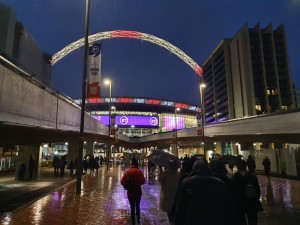 About the author: Laura Mott