Inter-school competition is finally back with lots of fun, excitement and smiles on show at the South Cambs School Sports Partnership Girls Football Competition earlier this week.

The event was held at Histon & Impington Recreation Ground with 18 schools fielding a team of Year 5/6 girls for the competition. All of the teams played in a round robin group stage before qualifying for the play off matches. Making it through to the semi finals were Linton Heights, Milton Primary, Histon and Impington Brook and Cottenham. Both games were extremely competitive with Cottenham beating Histon courtesy of a golden goal and Milton overcoming Linton 2-1. The final was equally competitive with Cottenham taking the lead only for Milton to equalise. Again, the game went to golden goal but this time neither team managed to score so the match went penalties which Milton won thanks to some very strong penalties. Some family rivalry added to the excitement of the final with Emily Moore scoring the winning penalty to beat the team led by her dad who is a teacher at Cottenham Primary School. It was all smiles afterwards though with all of the girls pleased to make it through to the final and come away with medals. 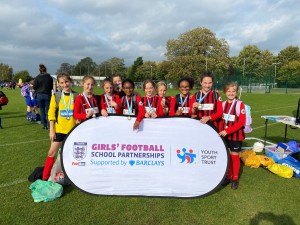 “It was a great event played in a really positive and friendly environment. We had the Cambridge United Women’s Scholars from Cambridge Regional College refereeing all of the matches and they did a really professional job and were great role models for the younger girls.

Another group of sports leaders from Impington Village College helped with the overall running of the event.

The Football Fun Factory also attended the event with their inflatable dartboard which was a real hit with the girls who loved testing the skills on this between matches.” 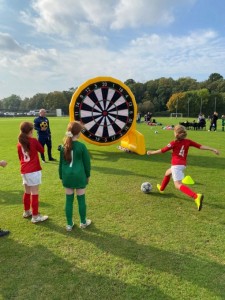 As well as medals for the winners and runners up all of the teams received certificates and there was a special ‘Spirit of the Games Award’ which was presented to the team from Elsworth Primary school for showing great team spirit, teamwork and respect throughout the competition. 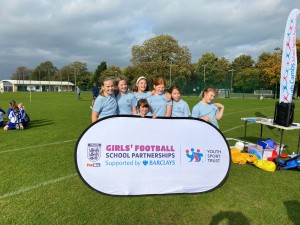 South Cambs School Sport Partnership is part of a nationwide scheme that aims to mainstream football in school for girls with the vision to ensure every girl has equal access to football in school by 2024. To find out more visit www.girlsfootballinschools.org

“Football is our national sport and we want to make sure girls have the same opportunities to play football that boys do. We want them to play in the curriculum, at breaktime, after school, at local clubs -wherever, whenever they want to play, with no barriers or stereotypes.

We will be working with schools, clubs and community providers to drive this change locally. If you want to get involved and help please visit www.englandfootball.com/letgirlsplay or get in touch cmcdonnell@combertonvc.org 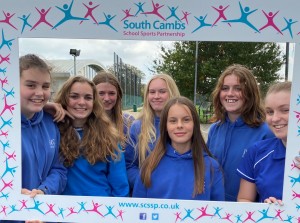