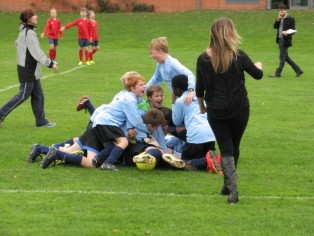 A record number of primary schools from across South Cambridgeshire took part in the district round of the English Schools FA football competitions on Thursday 23rd October. The event for Under-11 school teams included three separate competitions; small schools, girls teams and an open 7-a-side competition with a total of 35 school teams battling it out for one of the three titles on offer.

The competition organised by South Cambs School Sports Partnership was hosted at Impington Village College with sports leaders from the college assisting with the running of the event; alongside referees from Cambridge Regional College who also volunteered their time to support the event.

The three competitions were all played out in a round robin format of two pools with the top team from each pool then playing it out in a final to determine the winners.

In the small schools competition, for schools with fewer than 120 pupils in Key Stage 2, it was extremely competitive. Last year’s runners up Harston and Newton qualified from Pool 1 ahead of Meldreth Primary School and in the final they came up against Elsworth Primary School who had qualified from Pool 2 in great form with 4 wins and a draw under their belt. With the scores level at the final whistle, extra time was needed and it was the team from Elsworth who immediately went on the attack and scored the ‘golden goal’ to send their supporters wild and clinch victory and the title of Small Schools Champions!

Ten teams battled it out in the girls’ competition with the teams from Histon & Impington Juniors and Coton Primary finishing top of the two groups. In an extremely competitive showdown it was last year’s county champions Histon & Impington Juniors who edged it with a single goal to claim the winners shield and a place in the County final for the second year running.

With thirteen schools in the 7-a-side competition and only one team from each pool qualifying it was going to be tough to make it through the six group matches and reach the final. As predicted both groups were close with some crucial matches between the top three or four teams but when all the points were added up it was Swavesey Primary School who qualified for the final above Histon & Impington Juniors from Pool 1 and Willingham who came through Pool 2 thanks to a good win over second placed Linton Heights. In the final, the team from Swavesey showed their quality with a convincing 2-0 victory earning them the title of South Cambs 7-a-side Champions 2014-15 and the winners shield.

The three winning schools will now go onto to represent South Cambs in the County Finals in January where they will compete against the winners from the other districts for the chance to qualify for the ESFA regional finals.
Claire McDonnell, Partnership Manager, said “the event was a great success, it really does get bigger and better every year. We were delighted with a record entry of 35 teams this year and were particularly pleased to see so many of our small village schools fielding teams. Over 350 children were involved today and they represented their schools with pride and gained a great deal of enjoyment from the day. We must thank the sports leaders from our Leadership Academy at Impington Village College and the leaders from Cambridge Regional College who really did do a fantastic job in refereeing all of the matches with such control and confidence.”

The final results for each competition are detailed below: