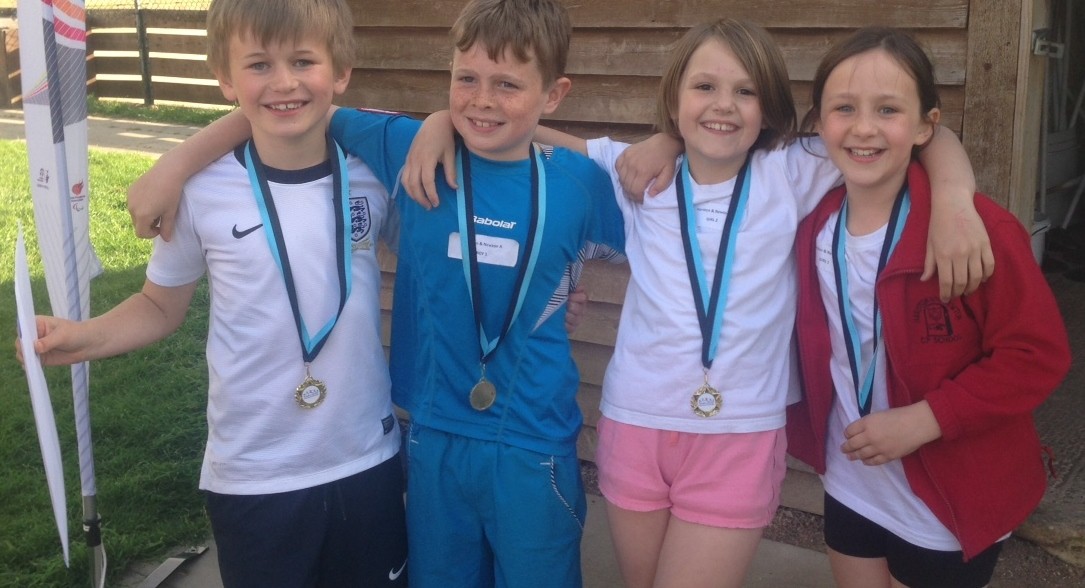 With an entry of 16 teams into the event the competition was split into a separate Cup and Plate competition with matches played over 8 mini courts and umpired by tennis leaders from Melbourn Village College.

In both competitions schools played each other in a round robin format before competing in a play-off match to determine their finishing position.

Qualifying into the final of both the ‘Cup’ and ‘Plate’ Competition were the teams of 2 boys and 2 girls from Harston & Newton and Meldreth primary schools. In the cup final Harston & Newton won by 3 games to 1 to take the winners medals.

The Plate final between the same two schools was a much closer contest though with the boys from Harston winning both of their matches before the girls from Meldreth came back to win their two singles matches. This meant it was a 2-2 draw in games so the result had to be decided on points with Harston & Newton narrowly coming out on top winning 34 points to the Meldreth teams 26!

Both schools now go through to the SSP Finals where they will take on the top 2 teams from the competition held at Comberton Village College on Weds 25th May, to determine the overall SSP Year 3/4 Mini Red Tennis Champions for 2016. The top two teams from the SSP Finals will then qualify to represent South Cambs SSP at the Cambridgeshire and Peterborough Sainsbury’s School Games Summer Finals on Thursday 30th June in St Ives.

New for this year’s competition was a special ‘Spirit of the Games’ award which has been introduced to support the work being done in schools to encourage children to think about the lessons that can be learned through sport and the importance of values such as respect, determination, teamwork, honesty, passion and self-belief; not only in sport but everyday life. The ‘Spirit of the Games’ award therefore recognises the team that has shown good sportsmanship and best demonstrated these sporting values and was judged by the sports leaders and competition organisers.

The winner of this award was Pendragon Primary School for demonstrating great team spirit, enthusiasm and a positive attitude throughout their matches as well respect for the umpires and opposition. Other teams recognised for showing good spirit were Great Abington and Meldreth.

Claire McDonnell, Partnership Manager and organiser of the event said; “It was great to see so many children getting their first taste of competitive tennis, there were some really close and exciting matches that were all played in a lovely, friendly spirit.

Well done to all of the teams and children who took part and a big thank you to all of the sports leaders who did a fantastic job of scoring the games and helping the event run so smoothly.”