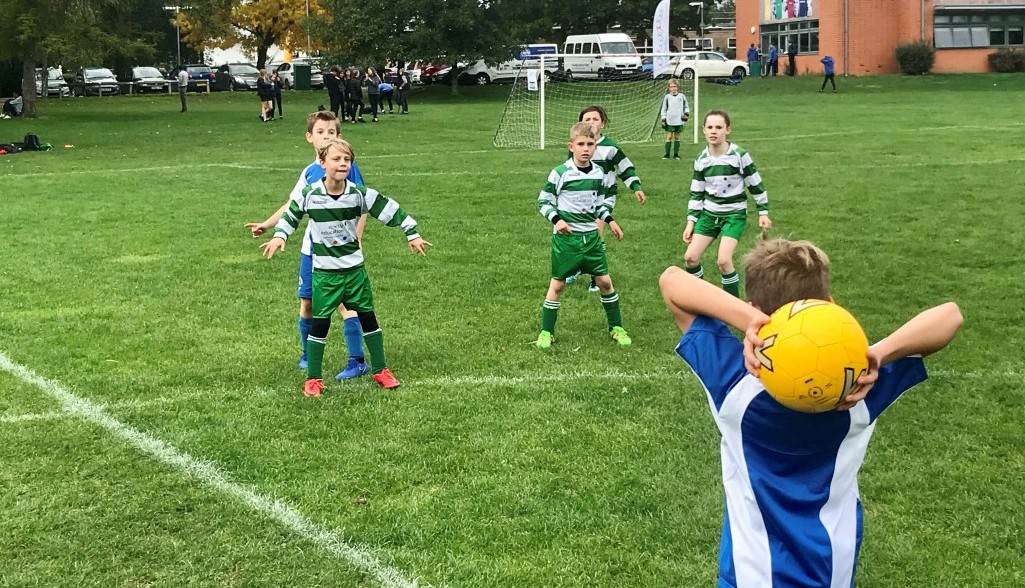 There was a great turn out for the South Cambs round of the English Schools FA football competitions held over two days this week at Impington Village College. The event for Under-11 7-a-side school teams included three separate competitions; small schools, girl’s and large schools with a record breaking 48 teams battling it out for one of the three titles on offer. All three competitions were played in a round robin format with schools playing all of the other teams in their pool. The top teams from each pool then qualified for the final to determine the winners.

In the small schools competition, for schools with fewer than 120 pupils in Key Stage 2, it was extremely competitive with a high standard of football throughout. In fact, there was not much to separate the top few teams in each pool, but it was the teams from Harston & Newton and Great Abington who went into the final. Great Abington were probably slight favourites in the final having not lost a game in the round robin stage, but it was the first time they had made the final and they were up against a school with a strong tradition of success in this competition. It was a very evenly contested final with Gt Abington having the best chances early on, but a long range shot from Harston & Newton got them the goal they needed and a 1-0 victory to take away the winner’s shield. Burrough Green and the All Stars team who had come together to make a team at late notice when another school withdrew were winners of the ‘Spirit of the Games’ award for showing great respect and sportsmanship.

There was a record entry of 19 teams into the 7-a-side competition for large schools, so teams were organised into a round robin of 4 pools. Winning their groups were the teams from Hatton Park, Waterbeach, Histon & Impington Juniors and The Vine with the latter two both qualifying for the semi-finals with an unbeaten record. Indeed, both teams carried this form through into the semi-finals as they both won convincingly to set up a mouth-watering final. As expected, the final was an end to end affair, but it was Histon & Impington Juniors who came out on top to win the trophy and the title of South Cambs Champions. Winners of the ‘Spirit of the Games’ award were Meldreth Primary School for showing great respect for each other, the officials and the opposition.

An impressive entry of 19 teams took to the pitches in the girls’ competition with the teams from Histon & Impington Juniors, Cottenham, Harston & Newton and The Vine all finishing their group matches unbeaten and qualifying for the semi-finals. It was the teams from Histon & Impington and The Vine that played the better football in the semi-finals to come out on top and set up a repeat of the boy’s final earlier in the week and not wanting to be out shone it was the girls from Histon that scored two great goals to retain their title as champions and take home a trophy they have now won 5 times. Spirit of the Games winners were again the ‘All Stars’ team which came together on the day with players from Harston & Newton, Cottenham & Histon kindly putting themselves forward to form a team when another school withdrew.

The winners and runners up in each competition will now go onto to represent South Cambs in the County Finals in February where they will compete against the winners from the other districts for the chance to qualify for the ESFA regional finals.

“All of the football competitions were a great success. We were delighted with the number of entries this year, particularly in the girl’s event where we had just under 200 girls taking part with many of these playing their first competitive football. I can only think they have been inspired by the success of the England women’s team this summer as we had nearly double the number of entries from previous years. Histon have always been strong in the girl’s competition but The Vine gave them a good match in the final this year which was nice to see. The game definitely seems to be growing for girls at the grass roots level.

All of the teams in all three competitions played with great respect for the opposition and officials which is how it should be and there was a good standard of football on display. All of the winners and runners up should be really proud of their achievements and wish them luck in the county finals.

We must thank Impington Village College for hosting the event again this year and the Cambridge United football scholars from Cambridge Regional College who did a fantastic job in refereeing all of the matches with real authority and confidence and coaching the ‘All Stars’ teams.”