This week saw the return of the South Cambs School Sports Partnership Year 5/6 Tag Rugby competition for the first time since 2019 and it couldn’t have been a nicer day for it with wall-to-wall sunshine for the event held at Shelford Rugby Club.

With entries from 23 schools the event was split into a separate morning and afternoon competition with sports leaders from Swavesey Village College officiating all the matches supported by coaches from Shelford Rugby Club.

In the morning 14 teams of mixed Year 5/6 children from Foxton, Hardwick & Cambourne, Harston & Newton, Haslingfield, castle Camps, Elsworth, Trumpington Park, Gt Abington, Jeavons Wood, Barton and Dry Drayton contested the competition which was played in a round robin format with all teams playing each other in their group in 10-minute matches.

All teams then went through to a play off match to work out their final position in the competition. The teams from Harston & Newton and Jeavons Wood won their respective groups by winning all 6 matches which set things up nicely for a really competitive final match and the players didn’t disappoint with a really entertaining end to end game of rugby. It was Jeavons Wood who won it though with a final score of 6 tries to 4. Haslingfield and Great Abington played off for 3rd and 4th place with both teams having only lost the one game in qualifying. Again it was a really even and high scoring match which ended 4-4.

The teams from Dry Drayton and Great Abington won the ‘Spirit of the Games’ awards for demonstrating good teamwork and honesty throughout the event. 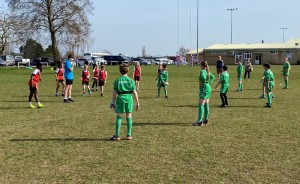 In the afternoons competition it was the teams from The Meadow, Bar Hill, Histon Brook, The Vine, Bassingbourn, Hatton Park, Pendragon, Swavesey, Linton Heights, University of Cambridge Primary and Cottenham that took to the pitches. With most schools entering two teams the competition was split into a ‘Cup’ and ‘Plate’ competition.

There were some fast paced and competitive matches in the round robin stages. Histon Brook and Swavesey won all their matches to make it through to the ‘Cup’ final with Pendragon & Bassingbourn making the 3rd/4th place play off with only 1 loss each. The final was again a competitive game with some great passing and good running by both teams, but it was Histon Brook who won it by 6 tries to 4 whilst Pendragon narrowly beat Bassingbourn 4-3 to take 3rd place.

In the ‘Plate’ competition meanwhile Bar Hill 2 and Bassingbourn 2 won their groups with Bassingbourn claiming a 6-2 victory in the final to pick up the winner’s medals.

The teams from Cottenham and The Vine were awarded the ‘Spirit of the Games Award’ for their positive attitude, teamwork and respect. 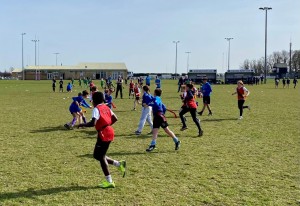 “It was great to have so many schools involved today and to see so many children enjoying the game of rugby. We had over 400 children taking part today and for many of them it would have been their first experience of competitive rugby.

What an amazing experience for them getting to see the fantastic facilities at Shelford and play on the pitches there. We are grateful to the club and the staff for hosting the competition, helping to train the leaders and generally supporting the event on the day.

We also need to thank the team of sports leaders from Swavesey Village College who were there all day and refereed 100 matches between them across the day as well as helping with the results table and general running of the event. It was a great experience for them too and a chance for them to develop their organisational and communication skills.”