The mood was quietly focused whilst the children demonstrated their skills on the vault and floor in front of the judges and on looking spectators. At stake was the chance to represent South Cambs SSP at the Cambridgeshire and Peterborough School Games Spring Festival, with the top two schools qualifying to take on the best schools from across the County. 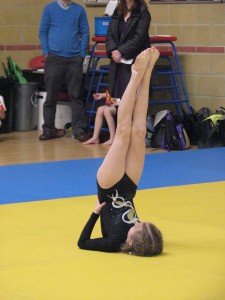 After a welcome and warm up led by young coaches from Comberton Gymnastics Club the competition started.

The mixed teams of six children from Steeple Morden, Great Abington, Monkfield Park, Milton, Cottenham, Coton, Linton Heights, Bassingbourn, Harston & Newton, Haslingfield, Meridian & Jeavons Wood schools all had to perform a vault and then either a floor or body management routine with each performance judged and given a score out of 10. Each child’s individual score in both disciplines was then combined to give an overall team score out of a maximum of 120.

The competition was fiercely contested and after all of the scores were added up less than 5 points separated the top 5 teams. With strong performances throughout the whole team it was the children from Linton Heights Junior School who out performed all of the others to claim the title of South Cambs champions! It was certainly close though with last year’s winners Coton Primary School finishing just .4 of a point behind them in second place.

The top 3 scoring individuals were also awarded with medals with first place going to Isabella Howarth from Meridian, in second place was Lucy Phillips from Bassingbourn and in 3rd place was Manuela Jiggins from Coton. 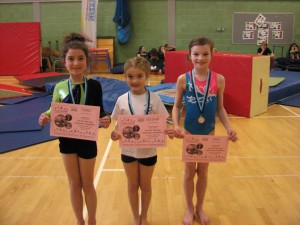 Qualified young judges from Melbourn, Cambourne, Swavesey & Cottenham Village Colleges as well as coaches from the County Young Coach Academy did an expert job in scoring the performances of all of the competitors, keeping the competition running smoothly and encouraging and supporting the young gymnasts. 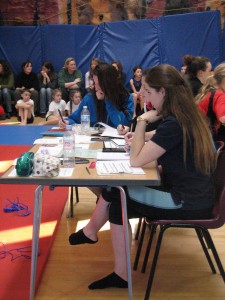 New for this year’s competition was a special ‘Spirit of the Games’ award which has been introduced to support the work being done in schools across the Partnership to encourage children to think about the lessons that can be learned through sport and the importance of values such as respect, determination, teamwork, honesty, passion and self-belief; not only in sport but everyday life. The ‘Spirit of the Games’ award therefore recognises the team that has best demonstrated these sporting values and was judged by the sports leaders and competition organisers.

The winner of this award was Jeavons Wood Primary School for showing great determination throughout the competition and not giving up whilst supporting and encouraging their team mates. 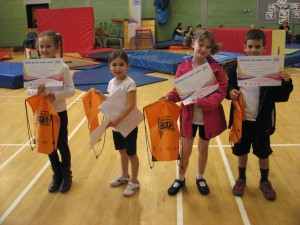 “The young judges did an exceptional job today we couldn’t have run the competition without them, they were focused and efficient throughout. It was really pleasing to see the standard of gymnastics on display, I think it gets better every year and it was obvious the schools and children had all been practising hard. It was good to see some different schools taking part this year, giving more children the opportunity to represent their school.

We would like to congratulate all of the children and schools who competed and we wish Linton Heights and Coton Primary the best of luck at the county finals next month.”

To view all of the photos please visit our Facebook page.