It was an action packed afternoon at Swavesey Village College as twenty four teams battled it out at the partnerships Year 5/6 Tag Rugby competition. The competition was a qualification round for the Cambridgeshire & Peterborough Sainsbury’s School Games Spring Finals with the top two teams going through to represent South Cambs at this prestigious event.

The competition was played in a round robin format with teams playing all of the other schools in their pool. There was a good standard of rugby on display with some fast and furious matches played in a competitive but friendly spirit which was lovely to see. 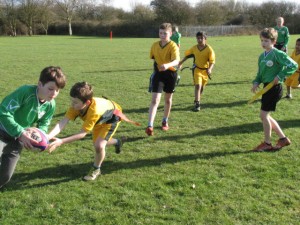 The teams from Steeple Morden, Jeavons Wood & Cottenham went through their group matches unbeaten to qualify for the semi-finals. Whilst The Vine took the other semi-final place with 3 wins, 1 draw and 1 defeat giving them a point advantage over Pendragon who finished the group in a close 2nd place. 3rd to 6th placed teams in each group qualified through to a final play-off match to determine their overall finishing position.

The semi-finals lived up to expectation and produced some excellent rugby. Jeavons Wood deservedly earned themselves a place in the final by beating Cottenham by 2 clear tries. The other semi-final between The Vine and Steeple Morden was 1-1 at fulltime which meant the game had to go to the dreaded golden try. This produced a great spectacle for the on looking spectators with the players giving 100% for their respective schools in search of the winning try; with play switching from one end to the other. There had to be a winner eventually though and it was Steeple Morden that clinched the victory and took the other place in the final. The final produced a flurry of tries but with 7 wins from 7 matches it was Steeple Morden that took the winners medals and shield with a 3-2 win.

The ‘Spirit of the Games’ award that recognises the team that has shown good sportsmanship and best demonstrated the sporting values of respect, determination, teamwork, honesty, passion and self-belief was awarded to Swavesey Primary School B team. The sports leaders judged them as the winners for showing great team spirit and supporting each other and other teams’ players as well as congratulating the referee.

Claire McDonnell, Partnership Manager said, “It was an exciting afternoon of competition and congratulations must go to all of the players and schools that took part. It was nice to see so many different schools represented in the competition, with a number of schools taking part for the first time which is fantastic.

I must also say a massive thank you to the team of leaders from Swavesey Village College who did an exceptional job in officiating the 70 plus matches and ensuring the event ran smoothly. They showed great initiative and professionalism and were a credit to their school.”

Steeple Morden & Jeavons Wood both now go forward to represent South Cambs SSP at the Cambridgeshire and Peterborough School Games Spring Finals on 23rd March where they will be joined by Meldreth & Harston & Newton primary schools who qualified in the small schools competition. We wish them all the best of luck!