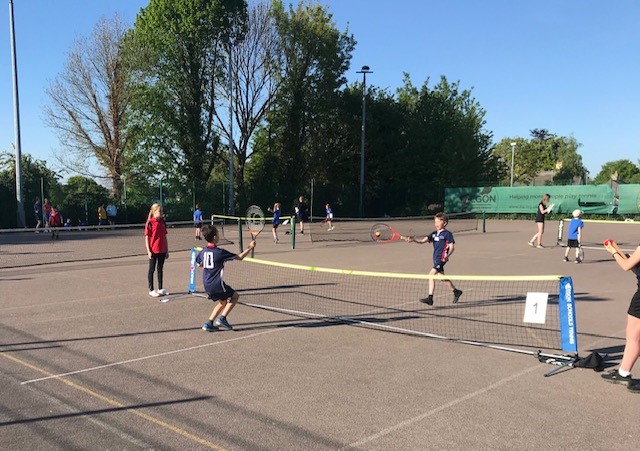 School teams turned out in force for the Partnerships annual Year 3/4 Mini Red tennis competition. The competition which is part of the countywide School Games programme involves teams of 2 girls and 2 boys competing in mini singles matches. Entries came in from 17 schools with many of them entering A, B, C & even D teams in some cases so matches were held at 3 venues over 3 separate afternoons.

The first event took place at Linton Village College on an afternoon of sun, rain, sun and then more rain but it didn’t deter the teams from Gt Abington, Burrough Green, Histon Juniors & Linton Heights! The competition was split into a ‘Cup’ and ‘Plate’ competition with teams playing each other in a round robin format. With 9 wins from their 12 singles matches Histon & Impington Juniors won the ‘Cup’ competition ahead of Burrough Green who finished as runners up. Not to be out done the Histon B team claimed victory in the ‘Plate’ competition with Gt Abington finishing in 2nd position.

There was a full entry of 16 teams at Melbourn Village College with the event again split into a ‘Cup’ and ‘Plate’ competition with schools playing each other in a group round before competing in a play-off match to determine their overall finishing position.

The final of the ‘Cup’ competition was an all Harston & Newton affair with their A & B teams winning their groups before taking to the court in what was a closely contested final match. The score in singles games finished 2 a piece but the A team edged it on points count back to win the competition and qualify for the South Cambs finals. The ‘Plate’ competition was won by Steeple Morden B team who beat Meldreth B 3-1 in the final.

The third event was held at Comberton Village College were two different schools to recent years, Coton & Willingham made it through to the ‘Cup’ final. The final was a competitive affair with some close matches and long points, but Willingham won 3 of the 4 singles matches to take the winners medals and the last place in the Partnership finals.


Meanwhile in the ‘Plate’ competition Haslingfield and Willingham B teams contested an extremely close match with both schools winning 2 games. So, the final had to be decided on the number of points won and with Haslingfield winning 26 to Willingham’s 24 it was Haslingfield that took the winners title.

The teams from Histon & Impington Juniors, Harston & Newton and Willingham all now go through to the South Cambs  School Sport Partnership Finals on Monday 10th June 4-5pm at Comberton VC where they will compete for a chance to represent the Partnership at the Cambridgeshire and Peterborough School Games Summer Finals on Thursday 27th June in St Ives.

Claire McDonnell, Partnership Manager and organiser of the competitions said;

“We had three great afternoons of tennis with 38 teams and over 150 children taking part. For many of the children it was their first time playing competitive tennis and quite a few of them were nervous when they arrived but they soon overcame their fears. The sports leaders who were umpiring the games made them feel at ease and helped them when required.

I’m pretty sure they all left having had a great time, there were certainly lots of smiles and happy faces at the end. Hopefully some of these children will now be inspired to go on and play more tennis and will perhaps go along to a local club.

Its all about giving it a go and doing your personal best and all of the children did that. There were plenty of competitive matches and some really good tennis at times and the nice thing was the friendly spirit in which all of the matches were played.

We had almost 50 sports leaders from Melbourn, Linton, Comberton & Cambourne Village Colleges who helped across the three events and we must say a big thankyou to them as without them competitions like these just wouldn’t happen. They are a key part of our workforce and they did an outstanding job in umpiring and scoring all of the matches and at times encouraging and coaching the children.”