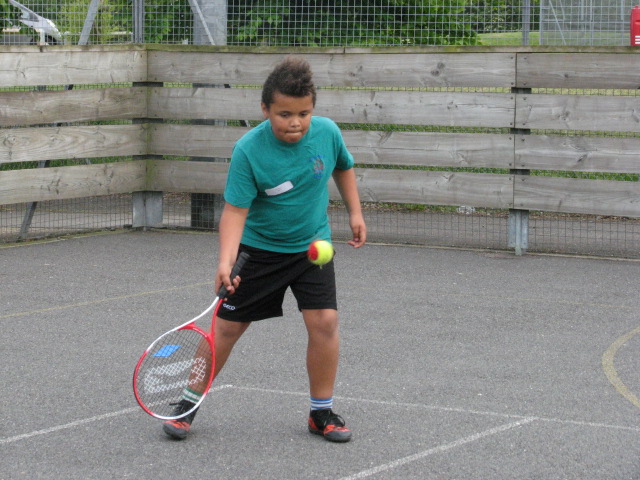 The second South Cambs tennis competition of the week was held on the courts at Comberton Village College but unfortunately this time the summer sun was nowhere to be seen and instead the players had a cold wind to deal with!

It didn’t dull the atmosphere though as the 16 teams from Swavesey, Willingham, Haslingfield, Elsworth, Burrough Green, Coton, Jeavons Wood, Cottenham & Hatton Park took to the courts. Teams were made up of two boys and two girls from years 3 & 4 with each player competing in a singles match against their opposite number and doing their best for their school team.

The competition was organised into 4 groups with teams playing each other in a round robin format before competing in a play-off match to determine their finishing position. All of the matches were expertly umpired and scored by sports leaders from Comberton, Cambourne, Impington and Swavesey Village Colleges.

There were some closely fought matches in the group stages with some excellent tennis on display for the on looking spectators who had come out to cheer on their children and school teams. The teams winning their groups and making it through to the semi-finals were Swavesey, Elsworth, Haslingfield & Jeavons Wood and the matches to follow really couldn’t have been any closer with both semi-finals finishing at 2 games all. This meant the matches had to be decided on the number of points won and it couldn’t have been closer with Swavesey beating Elsworth by 22 points to 21 and Jeavons Wood overcoming Haslingfield by 25 points to 24!!

So it is last year’s champions Swavesey and Jeavons Wood that go forward to the SSP Finals which are to be played at Comberton VC on Monday 11th June. At the finals they will take on the top 2 teams from the competition held at Melbourn Village College earlier in the week with the winners going forward to represent South Cambs SSP at the Cambridgeshire and Peterborough School Games Summer Finals on Thursday 28th June in St Ives.

The ‘Spirit of the Games’ awards recognise those children that have best demonstrated the sporting values of honesty & passion and are nominated by the sports leaders. Awards went to the following children:

Alister, Willingham Primary School –for being so polite and courteous towards his opponents and the umpires and for showing great perseverance and effort during his matches.

Cormac, Elsworth Primary –demonstrating great positivity and enthusiasm when playing even when he wasn’t winning.

Claire McDonnell, Partnership Manager and organiser of the event said;

“It was a fabulous evening of tennis with lots of competitive matches which were all played in good spirit with all of the players shaking hands at the end and thanking the umpires.

Well done to all of the teams and children who took part and a big thank you to all of the sports leaders who did a fantastic job of scoring the games and helping the event run so smoothly.

Hopefully some of these youngsters will now be inspired to go on and play more tennis and will perhaps go along to a local club.”